Exhibitions were held annually until 1892, when the Society was reorganized by Thomas Allen, Charles Copeland, and Hendricks A. Hallett, changing the name to The Boston Society of Watercolor Painters. Among the 27 charter members were Thomas Allen, President until his death in 1924, F. Childe Hassam, Joseph Lincoln Smith, and honorary member, John Singer Sargent.

A few noteworthy exhibits held early in the Society's history, other than the Annual, include a show in 1920 at Marshall Field & Co., an exhibition at the Boston Museum of Fine Arts in 1925, and a show that traveled throughout the Midwest in 1926, under the auspices of the American Federation of Arts.

It must be noted that the Society did not include women so in 1887 a group of women artists looking to have more opportunities to exhibit their work, formed the Boston Water Color Club. Over the years, the group included such distinguished artists as Sarah Wyman Whitman, Sarah Choate Sears, Martha Silsbee, Susan H Bradley, and Helen Bigelow Merriman.

In 1925, six women were the first to be admitted to The Boston Society of Watercolor Painters and that was in conjunction with the show that year at the Museum of Fine Arts. They were Susan H. Bradley, Eleanor W. Motley, Nellie Littlehale Murphy, Margaret J. Patterson, Sarah C. Sears, and Marjorie Very. They were followed in 1931 by Polly Nordell, Sally Cross Bill in 1932, and 1936 by Laura Coombs Hill. 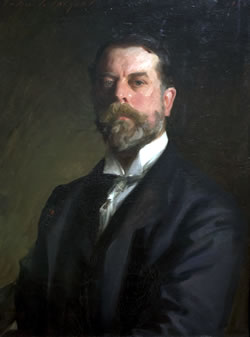 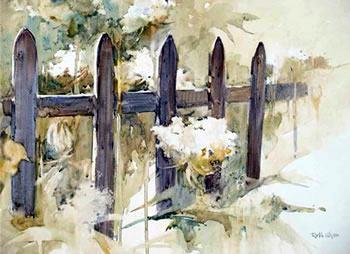 The Annual member's Exhibitions were held at The Boston Art Club on the corner of Dartmouth and Newbury St. In celebration of its 50th anniversary, the Society held its Annual Members Exhibition at the Museum of Fine Arts in 1939. Vose Galleries, on Boylston St., was the venue for the Annual from 1928 until 1950.

Exhibiting at The Museum of Fine Arts in Boston, became an annual event starting in 1951. With the exception of 1966, our annual show was held there until 1969, when a policy change at the Museum no longer allowed privately organized groups to exhibit.

Throughout the 1970s our Annual Members Exhibits were held at The Boston Art Club, The Guild of Boston Artists, and the Federal Reserve Bank Gallery in Boston.

Many distinguished members of the Society have held the office of president, including Thomas Allen who served for the first 30 years, Charles Mahoney, Joseph Santoro, Carlton Plummer, and Frederick Kubitz.

In 1988, NEWS began hosting a national biennial juried competition, which was held at the Federal Reserve Gallery through 2000 when the gallery closed. Since then it has been held at The Concord Art Association, Bennington Center for the Arts, North Shore Art Association, and the South Shore Art Center.

In October 2010, NEWS celebrated our 125th anniversary with a members' invitational exhibit at the Plymouth Center for the Arts in historic Plymouth, Massachusetts. The 140 paintings included the best work by current as well as past signature members.

The exhibition committee, chaired by President Becky Haletky, found works by 24 deceased members as far back as Lassell Ripley 1896-1969 and Charles Curtis Allen 1886-1950. The exhibition, attended by thousands, was deemed a huge success.

In the fall of 2020, NEWS opened the NEWS Gallery in the Plymouth Center for the Arts, which just finished a multimillion-dollar renovation, in downtown Plymouth, Massachusetts. The NEWS Gallery exhibits six shows a year, each a two months run, opening up the opportunity for exposure for our signature and associate members alike. 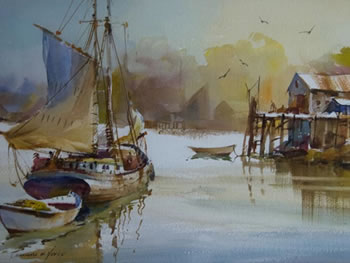